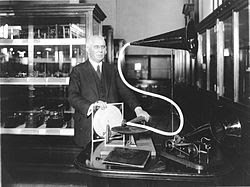 March 4, 1877: The microphone was created for telephone communications by inventor Emile Berliner.  Bell telephone later purchased the patent from Berliner for $50,000.

Berliner was awarded his patent for his "gramophone" which recorded sound on cylinders.  This same method was used by Edison.  Berliner later invented a method to record sound on discs which he marketed to toy companies.
Emile Berliner Invented the Microphone