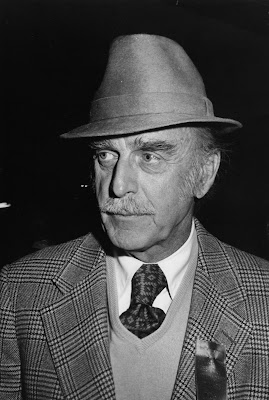 In the 1930's, thin, henna-headed John Dehner popped from show biz industry job to show biz industry job, jockeying discs and drawing cartoons for Disney.  He even played some piano.  One can see him dreaming of being in front of the camera, and it may have been the part of the villain he craved.  That's what he's known for, anyway.

Dehner often played a crooked bank owner or a leader of a band of desperadoes in movies and TV Westerns.  He was booked to play various bad guys in the radio version of Gunsmoke.

However, he wasn't always a villain or a one-time character.  He landed the role of playing Paladin on the radio version of Have Gun--Will Travel.  He co-starred with Ben Wright and Virginia Gregg.

We love the pencil-thin mustache, John. Thanks for the memories!
Ben Wright Disney Gunsmoke have gun will travel John Dehner Virginia Gregg