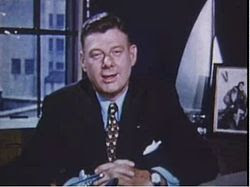 April 30, 1945: Arthur Godfrey Time started on CBS. It consisted of interviews with many stars. The show remained on the air waves until 1972.

This show was unscripted and was presented live instead of through recordings. Arthur Godfrey’s wide acceptance among the audience gave him the liberty to not only ad lib advertisements, but also allowed him to make witty comments about the products from time to time.
Arthur Godfrey begins his morning show on CBS