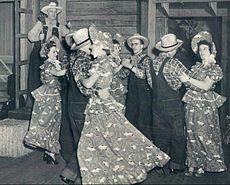 George D Hay created radio program, titled National Barn Dance and originated from the Eighth Street Theater from 1931. In 1933 NBC took the show and in 1946 the show has been moved to the ABC Radio network and aired until 1952 on Saturday nights from 6:30 p.m. to midnight.
barn dance debut WLS Barn Dance's first program