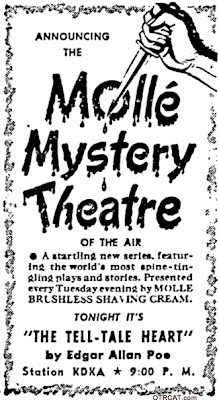 Today marks the 1943 debut of the thrilling crime show Molle Mystery Theater (later to be known simply as Mystery Theatre).

Its debut episode splashed onto the airwaves with some fanfare. Fans and media members alike were drawn to its premise and promise of skimming just the cream of classic mystery stories from the greatest authors.