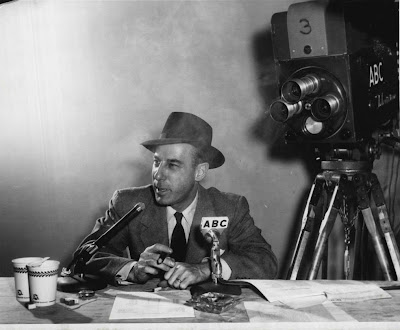 Early American baseball never had quite the voice it did in announcer Bill Stern.

Born on July 1, 1907, Bill Stern would lead a life of sportscasting and baseball announcing that very few in his genre ever eclipsed.

By 1988, 17 years after his passing in 1971, Bill Stern would be inducted into the National Radio Hall of Fame.

Stern started doing on-air broadcasting in 1925 for a Rochester, New York radio station. in 1937, Stern went to work for NBC doing boxing commentating on the Colgate Sports Newsreel. As one of the big names in radio sportscasting, Stern developed a theme of making on-air stories that were never authenticated in any form. He would give the acknowledgement that whether the stories were true or not; “might be actual, may be mythical, but definitely interesting.”

A car accident in 1935 caused Bill Stern to have one leg amputated; but, it never stopped him from his on-air work. He had opportunity to be the on-air sports commentator for NBC Newsreels. Stern had opportunity to portray himself in two Hollywood movie productions including Pride of the Yankees.

The verbose, but much loved sportscaster was also a major fan of baseball and loved to share stories; including the one about who created the curve ball  Stern never missed a chance to talk the sports he loved.