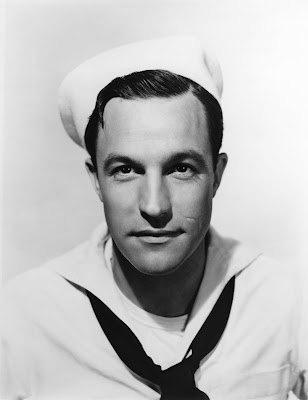 Hey, thrill seekers, did you know that superstar Gene Kelly appeared in several episodes of Suspense? One of today's birthday boys did just that, lending his considerable acting chops to such episodes as "Thieves Fall Out," "The Man Who Couldn't Lose," and "The Most Dangerous Game."

But what's just as thrilling is that in 1946 Cresta Blanca wines launched its radio program Cresta Blanca's Hollywood Players, on which it very proudly rolled out its stable of top Hollywood stars. Bette Davis, Gregory Peck, Joan Fontaine, and Gene Kelly were among the players. The show brought to listeners recently-written productions, both dramas and comedies. These included "Heaven Can Wait," "Kitty," "Pride of the Yankees," and "The Glass Key." The latter, in November of '46, presented Kelly's debut on the show.

This show's Kelly's versatility, since no one dances on the radio. Best known for Singin' In the Rain, Kelly is the only Pittsburgh-born dancer of which we are aware. He would've been one hundred and one today!
Bette Davis Cresta Blanca wines Cresta Blanca's Hollywood Players Gene Kelly Gregory Peck Hollywood Joan Fontaine Singin in the Rain The Pride of the Yankees