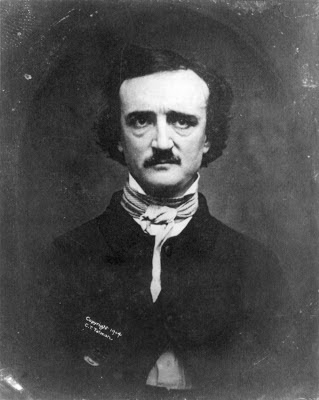 Edgar Allan Poe ate a live raven on the air on this day in 1928. Oh, all right. It was Charlotte Bronte. But today is Poe's birthday (1809) and his contributions to old time radio should be celebrated.

For the latter, "The Tell-Tale Heart," the WC crew had to lengthen Poe's original story. It was a task also undertaken when Inner Sanctum and The Hall of Fantasy adapted the work. Inner Sanctum's version starred the master of disaster, Boris Karloff.

Black Mass adapted "A Predicament," "The Telltale Heart," "The Man in the Crowd," and "Found in a Bottle." NBC Presents: Short Story ran "Cask of Amontillado," and "The Tell-Tale Heart."