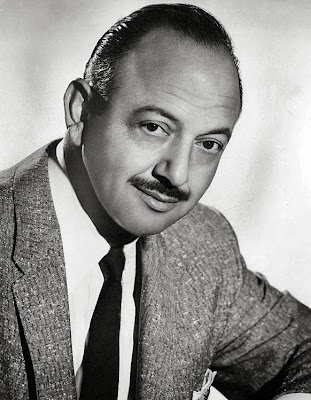 By definition, all Radio Stars are voice actors. No one had as many voices as Mel Blanc. Or perhaps, all those voices had Mel Blanc. Several voice actors have been called “the man of a thousand voices” with some degree of exaggeration. Mel's son, Noel, claimed that Mel's count was closer to 1500.

Mel was born in San Francisco, the second son of Frank and Eva Blanc, on May 30, 1908. The family moved to Portland, OR, where Mel attended Lincoln High school. Mel has been always fond of making up voices and clowning. At the age of 16,  he decided to change his last name because a teacher warned him that he could end up that way, a Blank, a nothing. It is hard to imagine someone as good natured being kept down by such a prediction. He began working in vaudeville throughout the Northwest, and at 17 was the youngest orchestra conductor in the country.

Mel's radio career began at KGW in Portland on the show The Hoot Owls. Mel became  popular with his ability to so many voices and character, and in 1932, he left for Hollywood to find everlasting fame. At this time,  fame eluded him, but he did meet and marry Estelle Rosenbaum. The couple returned to Portland, where Mel went to KEX to produce and co-host the late-night Cobweb and Nuts show. By now, Estelle was gaining confidence in her husband's talents, and convinced him to give Hollywood another try.

He found a job with KFWB, a station that belonged to the Warner Brothers Studio. In 1937, Mel found work with Leon Schlesinger Productions, whose cartoons were distributed by Warner Brothers. Mel is best remembered for the many cartoon characters he brought to life in Warner Brothers cartoons, but in some ways it was just a stepping stone.

The animators loved the way Mel brought their drawings to life. When Mel was recording a voice, he would become the character. Noel claimed he could watch his dad working, and even with the speakers turned down he could tell which character he was playing. Mel was not the only voice talent on Schlesinger's payroll, but he was the most versatile. Voice actors rarely got screen credit in cartoons. When Mel thought he deserved a raise, he went to Schlesinger with his demands. Notoriously tight-fisted Schlesinger was not about to give up anything that would eat into his profits, but did agree to credit “Voice characterizations by Mel Blanc” on each cartoon.

Now that Mel's name was appearing on screens across the country, he began to get even more radio work. He became part of the company on The Jack Benny Program as a sort of human sound effects machine. He played Jack's barely-running Maxwell automobile and gave the growls of Jack's pet polar bear, Carmichael. One day Mel told Jack “Mr. Benny... I can talk too!” Jack told his writers to let him, and Mel became Polly the Parrot, a tormented department store clerk, Jack's long suffering violin teacher, and the announcer at the train station ("Train leaving on track five for Anaheim, Azusa and Cu... camonga!").

Mel had plenty of other radio work. He was the friendly postman on the Burns and Allen Show, as well as appearing on Fibber McGee and Molly, Abbot and Costello, and several AFRS programs. He gave voice to Yank magazine's Private Sad Sack. Mel's success on the Jack Benny Program helped him to get his own show on CBS. Unfortunately, Jack's writers did not come along, and the Mel Blanc Show only lasted the '46-'47 season.

Mel still had plenty to keep him busy. He even continued to work after an auto accident left him in a coma for three weeks (few people realize that for the first season of The Flintstones, Barney Rubble was played by a man in a full body cast!)