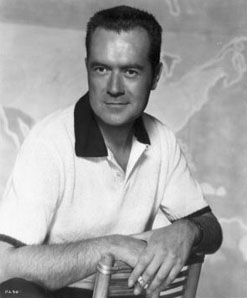 We can't know if Frank Lovejoy was voted "Most Likely To Be The Blue Beetle" by his high school class, but it seems possible. The steely-eyed, square-jawed actor exuded intensity and a detective's predatory determination. If we were alive, he'd be celebrating his one hundred and first birthday.

Lovejoy's voice was one of the most recognized in the business, for Blue Beetle and several other shows. Blue Beetle hit the airwaves in May of 1940. Lovejoy gave voice to the title character, a superhero (whose alter-ego's name was Dan Garrett) with the strength of ten men. He carried a beetle pendant and left it around town to alert evil-doers he was on to them. Lovejoy held down this gig only for a Summer, and then future episodes went uncredited as to the voice.

Frank Lovejoy is also well-known for his parts in Box 13, Nightbeat, Dragnet, and This Is Your FBI. When they needed a stern cop or investigator, they called Lovejoy.
Blue Beetle Box 13 Dan Garrett Dragnet frank lovejoy nightbeat This Is Your FBI