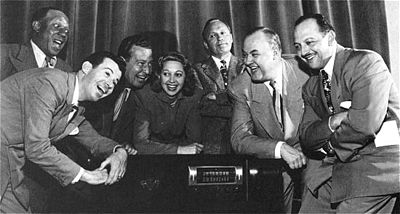 March 29, 1932: Jack Benny's radio debut: Jack Benny, who was at the time a newspaper columnist,  made a guest appearance on "The Ed Sullivan Show" on the CBS network.

The Jack Benny Radio Program, first aired in May 1932 and was a radio-TV comedy series that broadcast for more than three decades. The show was  regarded as a high-water mark in 20th-century American comedy.

Jack Benny started his career on radio as a guest of Ed Sullivan in 1932 until he has got his own time slot and show later that year in May, 1932.  Jack Benny's radio show was initially sponsored by Canada Dry Ginger Ale —The Canada Dry Program. At the beginning May 2, 1932, the program continued airing on the NBC Blue Network and continuing there for six months until October 26. After that the show was moved  to CBS on October 30. Jack Benny's Radio Show aired on CBS until January 26, 1933 with Ted Weems leading the band.