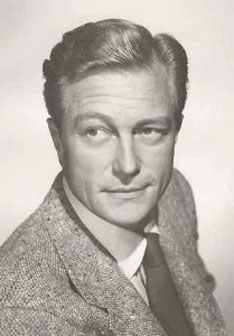 would be a 101! He was born on this day in 1914. In that year, the first airline flight cruised from St. Petersburg to Tampa; Ford Motor Co. began paying $5 for a 9-hour day; Charlie Chaplin played The Little Tramp, and George Washington Carver began experimenting with peanuts.

Radio was a technology rather than a broadcast medium, and silent films were sweeping the nation.

After he'd toiled for years in many small film roles, Denning became a movie star and then dived headlong into the shimmering pool of radio. He starred alongside Lucille Ball in My Favorite Husband from 1948-1951. This program allowed Denning to work with, in addition to Ball, character actors such as Hans Conried and Gale Gordon.

After that, he got "married" to Barbara Britton, starring as a husband in a much different spouse program, Mr. and Mrs. North. He became the third Jerry North on the long-running series, stepping into the lineage of Joseph Curtin and Carl Eastman.