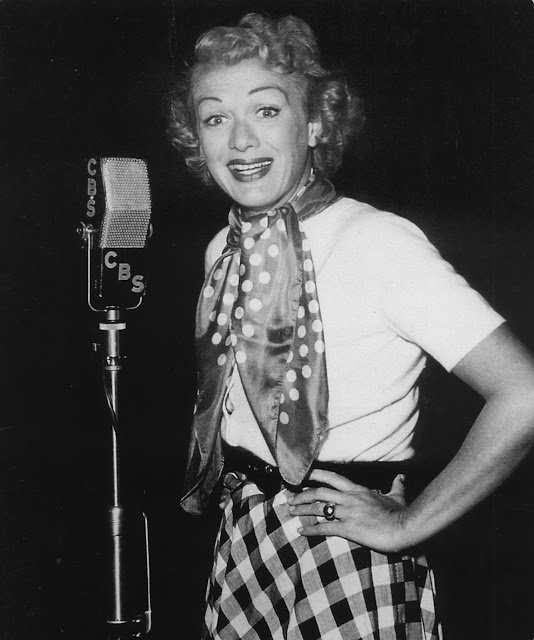 She was Our Miss Brooks; she played a pickpocket in The Marx Brothers flick At The Circus; and for an encore, turned in memorable performances as the wacky high school principal in Grease and its sequel. Eve Arden, born on this day in 1908, was multi-talented and loved by millions for her roles in radio, TV, and film.

The lovely strawberry blonde began her show biz career on the stage, as a teenager. But before long she was on the silver screen, finding a niche as the sidekick, witty and wise-cracking. Her prolific late-30's film output inlcuded Oh, Doctor, Stage Door, Cocoanut Grove, and Having Wonderful Time.

In 1948, after nearly two decades fighting in the show business trenches as a comic character actress, Arden landed a starring role, that of high school teacher Connie Brooks in Our Miss Brooks.

The literature teacher was likeable--in fact, praised by organizations of actual teachers--a strong female character who stood up to the shenanigans of the sketchy Principal Conklin (Gale Gordon). She was sarcastic rather than ditzy or bubbly, and rather than being hit on by her male colleagues, she was the one doing the hitting, repeatedly trying to snag the attention of the bio teacher, Mr. Boynton (Jeff Chandler).

The show succeeded on the radio and succeeded in its television guise, which ran from 1952-57.

Eve Arden's given name was Eunice Queens, and legend has it that the Arden came from a fortuitously-placed jar of Elizabeth Arden hand cream.

She died in 1990, and was posthumously inducted into the Radio Hall of Fame in 1995.