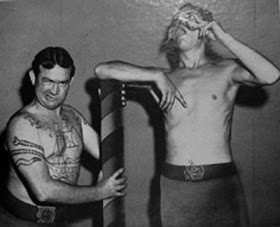 Not for the faint of heart, here is the remarkable 1946 Crepitation (Fart) Contest (part of the 1946 News Broadcasts Collection).

You'll enjoy the fart-off between champion Englishman Lord Windsmear, and  challenger, Australian Paul Boomer who had stowed aboard a cabbage freighter.

The hilarious comedy recording was apparently created a spoof by two Canadian radio sportscasters in 1946, but this 15 minute recording definitely has some gems in it.  Apparently they made several copies, but it was not for distribution. The recording was copied again and again on disc and reel to reel tape. It was distributed underground and played in dark rooms and back alleys around the world.

This recording is available with many other delightful treats on Random Rarities #7 available on  MP3 CD, Audio CD, and instant download.