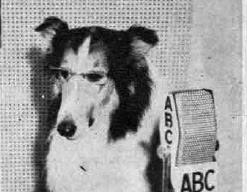 June 8, 1947: Fifteen minute program ‘Lassie’ aired for the first time on ABC. The show revolved around an amazing collie dog. The show was presented by Charles Lyon and dog noises were imitated by Earl Keen. Betty Arnold and Marvin Miller starred as dog’s owners. The program was sponsored by Red Heart Dog.

"Lassie" featured the story of a collie dog character created by the English Author Eric Knight. Before the story was adapted into a TV series, the radio show came years before, and aired every Saturday evening from 1947 to 1950.