January 1, 1923: KHJ in Los Angles for the first time broadcast the Rose Bowl 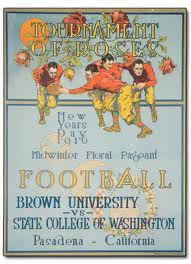 January 1, 1923: KHJ in Los Angles broadcast the Rose Bowl for the first time.

The Rose Bowl was presented by Vizio for sponsorship purposes. The contest was an annual American college football bowl game, usually played on the 1st of January every year. The broadcast of the game on January 1, 1923, dubbed the East vs West Football game, was confirmed by Jim Hilliker from a contemporary account in the Los Angeles Times. The game was the first game hosted at The Rose Bowl stadium. Previously, Rose Bowl games were hosted at Pasadena's Tournament Park,