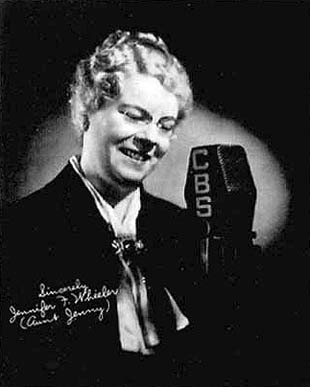 January 18, 1937: Aunt Jenny's Real Life Stories was aired for the first time by CBS. The story was broadcast completely in a 15 minutes episode which aired five times a week, Monday through Friday. Edith Spencer played Aunt Jenny, but she was eventually replaced by Agnes Young. The show lasted until 1956 and was sponsored by Spry Shortening and Lux Soap. The animal imitator, Henry Boyd, played Aunt Jenny's whistling canary.

Aunt Jenny's Real Life Stories was a radio soap opera that aired weekdays  from 1937 to 1956 on CBS. It featured Edith Spencer (and later, Agnes Young) as Aunt Jenny, who would narrate the story for the day's episode. After the story, she would offer the listeners her valuable advice. She would also introduce recipes that used the product of the show's sponsor.
'Aunt Jenny's Real Life Stories' told on CBS