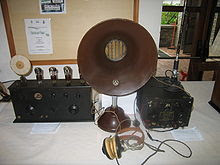 January 13, 1910: From the Metropolitan Opera House in New York City, Enrico & Emmy Destinn heard speaking through the phone's transmitter of the DeForest Radio Telephone Company.  The broadcast lead the way for additional operas to hit the airwaves including

The 1910 opera broadcast was transmitted from wireless transmitter had 500 watts of power and was reported that the broadcast could reach 20 km away on a ship at sea.

The radio opera broadcast was heard by the member of the press with receiver set on board ships in New York Harbor, in large hotels on Times Square and at New York city locations. The broadcast was also heard in Bridgeport, Connecticut.