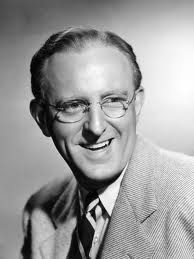 James Kern Kyser was born June 18, 1905 and became one of the most notable bandleaders of the 30’s and 40’s. He...oh wait, you may know him by his other name, Kay Kyser...went onto become of the most respected and admired radio personalities of his day. Because of his energy and enthusiasm while in college, Kyser was asked to head up a band whose leader was moving on to other pursuits. As the new bandleader, Kay Kyser discovered his talent lay more in the announcing end of leading then trying to perform an instrument. Kyser would record a couple of hit pieces for Victor before becoming nationally acclaimed. As the band toured the country, Kay’s benchmark of turning playing music into quiz time for the audience, earned the band the name of the Kollege of Musical Knowledge. And as the “The Ol’ Perfessor”, Kyser would use his position to query and encourage the audience into dancing with phrases like, “C’mon chilluns, let’s dance”. By the late 30’s and in through the 40’s, the Kollege of Musical Knowledge was performing on radio for Mutual and NBC. The “Ol’ Professor” was calling out the quiz questions on the air just before hitting the band music for listeners everywhere. Jack Benny and Burns and Allen radio programs were some of the venues that had visits by The Kollege of Musical Knowledge. Hit instrumentalists like Sully Mason and Jack Martin were part of the band, which identified the unique calibre and personality of this travelling ensemble. Kay Kyser would take his band and fame into the movie industry and television. But his legacy as the travelling center of musical academia was his showpiece. Kay Kyser passed away in June of 1985. The “The Ol’ Perfessor” had ended his tenure.
Burns and Allen Jack Benny Jack Martin James Kern Kyser Kay Kyser Kollege of Musical Knowledge Mutual NBC Sully Mason The Ol' Perfessor