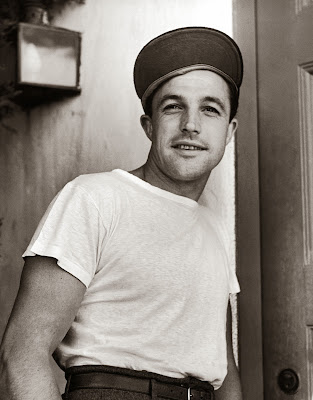 They just don't make 'em like Gene Kelly anymore, do they?  George Clooney, Tom Cruise, you name any of today's big leading men and whatever their virtues, they fall short of the charm and all-around talent of Gene Kelly.

He could act, he could sing, he could dance!  He could even choreograph. Today we celebrate the 1912 birth of Eugene Kelly, the man who gave us Singin' in the Rain, An American in Paris and so much more.

While dancing works only so well on the radio, Kelly did lend his talents to the medium that concerns us here.  He appeared on some of the cream of old-time radio, such as Suspense and The Lux Radio Theatre (I'll bet his appearances sold a lot of soap!).    He also appeared on episodes of The Hotpoint Holiday Hour, Opportunity USA, and The Best of Groucho.  His first known appearance on the airwaves was in 1942 (Your Hollywood Radio Reporter) and his last in 1978 (The Dean Martin Celebrity Roast).  What a lot of great memories in between!
An American in Paris Eugene Kelly Gene Kelly George Clooney Lux Radio Theatre Opportunity USA Singin in the Rain suspense Tom Cruise