November 23, 1929: The Marriage of Shirley Booth and Ed Gardner 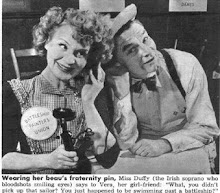 November 23, 1929:  Shirley Booth and Ed Gardner married on this date. Ms. Booth was a famous actress who played the title role on the television show Hazel. She also appeared with her husband on Duffy's Tavern as Miss Duffy and Archie.

In the years following her marriage to Ed Gardner , Ms. Booth win every major acting award without formal dramatic or musical training.  Her performance in the role of smart, sassy, take-charge maid on the TV sitcom Hazel propelled the show to the top of the ratings charts. She won two Emmys for Best Actress while on the show.

Their marriage ended in divorce in 1942 and each would go on to remarry.
The Marriage of Shirley Booth and Ed Gardner