on December 05, 2015
A happy birthday this time, not to an actor or a commander of the microphone, but to a writer and producer, William Spier.  Lovers of Adventures of Sam Spade and Suspense have enjoyed the good work of Spier. 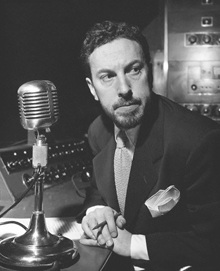 Born today in 1906, Spier started his writing career as a critic for the magazine Musical America.  After foraying into radio in 1929, he decided he'd like to stay in the medium a bit longer. He got a job as a director of the news show The March of Time.  It began as a WLW (Cincinnati) program that gave voice to material from Time magazine.  It eventually evolved into The March of Time, on which talented actors dramatized the day's big news stories.  Spiers got a chance to work with huge stars such as Everett Sloane, Orson Welles, Lionel Barrymore, Nancy Kelly, and Joseph Cotten.

From there, it was a stint as the chief of the writing department at CBS, a gig that led to his producership of Suspense and then The Adventures of Sam Spade.