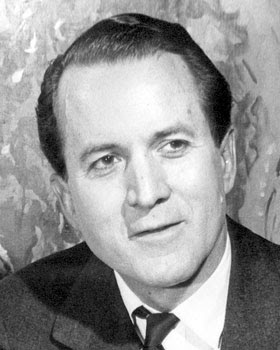 Hold on to your hats, buckaroos and buckarettes: today, we're bidding happy birthday to a public relations man!  It's no pretty business, working to protect corporations and other often-guilty parties.

But in addition to that line of work, Tex McCrary is often credited with being one of the pioneers of the radio talk-show format.

Born as John Reagan McCrary on this day in 1910, Tex broadcast two radio shows with his wife, Jinx.   Subjects were as weighty as venereal disease and the A-bomb.  On their show "Meet Tex and Jinx," the couple broadcast from a catbird seat just outside New York City's Waldorf-Astoria hotel.  They would grab celebs coming and going from the swanky lodging and cajole them into appearing on the air.  Thus the modern talk show was born.
A-bomb John Reagan McCrary Meet Tex and Jinx modern talk show Tex McCrary venereal disease