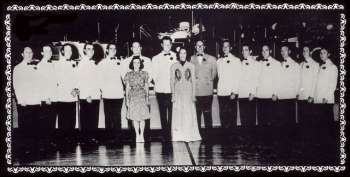 January 28, 1940: Beat the Band was first presented on NBC, featuring The Ted Weems Band. Listeners' questions were selected in the hopes of stumping the band. The questions were posed as riddles: What song title tells you what Cinderella might have said if she awoke one morning and found that her foot had grown too large for her glass slipper? If a listener's question was chosen, he or she received $10. If the band played the correct musical answer, Where Oh Where Has My Little Dog Gone?, the listener lost.

The first series of the show was broadcast every Sunday at 6:30 PM. It was later relocated to New York in 1943, to serve as replacement for the Raleigh Cigarettes Program.

Beat the Band lasted for four years, with its last episode airing on September 6, 1944.
'Beat the Band' premiered on NBC