You Bet Your Life debuted today in 1947 on ABC Radio. 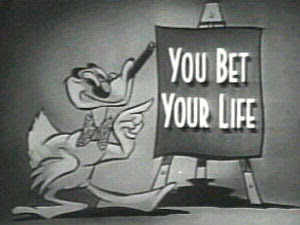 Apart from hearing it on the radio, You Bet Your Life could also be seen on television. The show featured teams of contestants consisting of one male and one female, usually selected from the audience. Sometimes, famous people were also invited to play. In the actual game, each team was given the chance to choose a category (from the 20 available), and their task was to answer the questions from that category. Every time they answered the question correctly, they earned money.

For those who had earned $25 or less, a very easy question would be asked, so that an incorrect answer was nearly impossible. Nevertheless, the hosts were shocked when one man incorrectly answered the question "Who is buried in Grant's Tomb?" His answer was "no one," pointing out that Grant's Tomb is not buried.

In 1960, the show's title was changed to The Groucho Show.
'You Bet Your Life' on ABC you bet your life debut