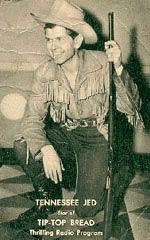 May 14, 1945: Tennessee Jed aired for the first time on ABC. The role of Tennessee was played by Johnny Thomas.