May 18, 1942: Don MacLaughlin starred as the Chief Counterspy in a radio drama series 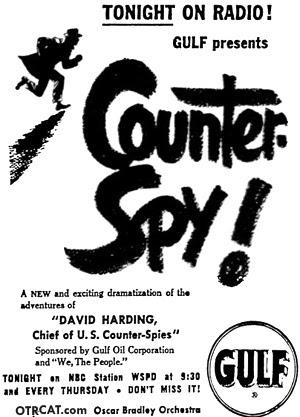 May 18, 1942: On this day, NBC Blue Network aired "David Harding, Counterspy" for the first time. The radio espionage show aired for 15 years.

" David Harding, Counterspy ," or " Counterspy  " in short, was a spy radio drama series that aired on NBC and Mutual for 15 years, from this date up to November 29, 1957. It starred Don MacLaughlin as the title character, David Harding. In the radio broadcast, Harding was featured as the head of the US counterspies who worked against the Japanese and German Forces during World War II.
Don MacLaughlin starred as the Chief Counterspy in a radio drama series