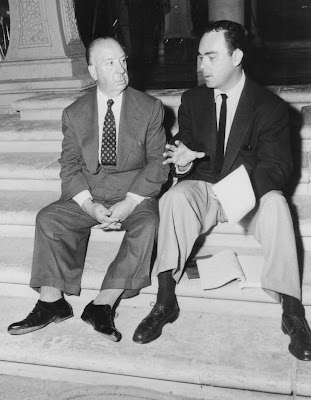 Only so many screenwriters become the subject of biographies, and John Michael Hayes is one of them. He was the subject of Steven DeRosa's Writing With Hitchcock which chronicled his screenwriting work for the famed director in the 1950s.

In radio's golden age, the medium attracted the best talent, and Hayes was no exception. When not writing Hitchcock movies, Hayes wrote for such radio smashes as The Adventures of Sam Spade, Inner Sanctum, and Sweeney and March. He wrote an episode of Spade called "The Chargogagogmanchogagogchabunamungamog Caper," the name purportedly coming from a river in Webster, MA.

We salute Hayes on the day of his 1919 birth. Thanks for the scripts, John!
'The Adventures of Sam Spade' Alfred Hitchcock Inner Sanctum John Michael Hayes Sweeney and March The Chargogagogmanchogagogchabunamungamog Caper