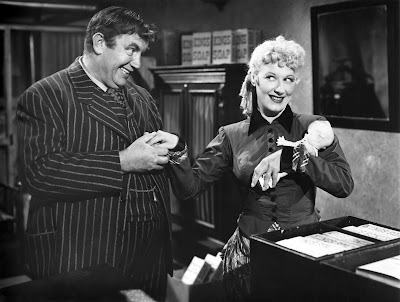 When Joan Davis was born on June 29, 1907, America was blessed with talent that would encompass all avenues of entertainment. This young comedian was going to make her mark on television, radio, vaudeville and in the movies...not in necessarily in that order. he first arena for performing was in vaudeville with her comedian husband Si Willis.

One of her enterprising talents was that of a physical comedian; her size and lanky build was suited for the making the slapstick variety of visual humor. In 1941, Joan Davis entered the radio arena by appearing on the Rudy Vallee Show, where she would become a regular a few months later.

When Vallee left to serve during WWII in 1943, Davis and Jack Haley became co-hosts of the program, The Sealtest Village Store. In 1945 she moved over to CBS and did a radio program centered around owning a tea room. In 1947, the show changed placing her name on the title still with the focus of the tea room and the happenings in Smallville, running until 1948. By July of that same year, Leave it to Joan ran in place of Lux Radio Theatre for the summer.

In August 1949 the program became a yearly diet for america with its run until March of 1950. Her physical comedy was played up on the radio and developed her prowess for that type of comedy. it worked for when NBC took her on television opposite of Jim Backus with I Married Joan. It ran until 1955. In 1961, MS Davis passed away at the age of 53 in Palm Springs, California. Comediennes like Lucille Ball and Eve Arden owe much of their success to the talents pioneered by Joan Davis.
Eve Arden Jack Haley Joan Davis Lucille Ball Lux Radio Theatre Rudy Vallee Show Si Willis Vaudeville