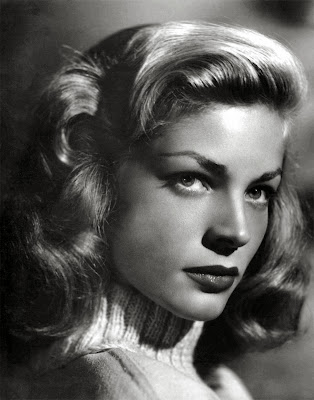 Lauren Bacall, today's birthday girl (1924) may be the only Hollywood figure to ever win the award for Prettiest Usher, a distinction Ms. Bacall garnered in 1942 while working on Broadway.  Incidentally, she made the acquaintance of ace thespian Gregory Peck while toiling in this capacity.

We may best know Bacall from her "bogey and fame", but she is now of course a legend in her own right, known not just for her elegance and beauty but for her considerable acting chops.

Her electrifying  voice played no small part in this, and it is what caused her to translate to radio so well.  Let's not forget that the dynamic duo of Bogey and Bacall also starred in a radio program called Bold Venture.  It was sort of about Bogart's characters' love for his small boat, but Bacall co-starred, and actors like William Conrad, David Rose, and Jester Hairston were also involved.

Ms. Bacall was also a gas on such radio programs as Command Performance and Let's Playwright.  In 1997, she gave an introduction to a broadcast fundraising event for Bill Clinton.  How's that for versatility?