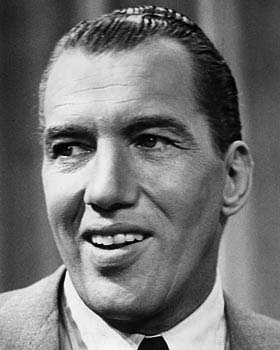 Well, you've heard today is Ed Sullivan's birthday, and that has a special meaning for old time radio buffs.  Sure, Sullivan was one of the giants of the world of television, but he had a huge radio career too.

He began with interview shows and with his program "Ed Sullivan Entertains."  This fifteen-minute show ran from fall of 1943 to summer of 1944.  On this program, sponsored by Mennen, the gossip columnist had spirited conversations with popular personages.

One reason Sullivan may have resonated so well with the general public, particularly once he became a TV star, was that he didn't look or even sound like someone who'd make his living in front of a microphone.  He was too serious and seemed to be of a different world.  But as a TV host, he would go down in history as the man who hosted and introduced a panoply of amazing entertainers such as the Beatles, Elvis Presley, Pearl Bailey, The McGuire Sisters, Perry Como, Peggy Lee, you name 'em.  Happy birthday, Ed!
Beatles Ed Sullivan Elvis Presley Pearl Bailey Peggy Lee Perry Como The McGuire Sisters