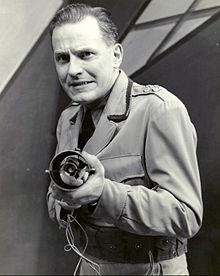 A hundred and two years ago today, Albert Hodge was born in Ravenna, Ohio. You probably remember Hodge as the voice of The Green Hornet, WXYZ's spinoff of The Lone Ranger.

Al landed work at the Detroit radio station as a jack of all trades. The station was the originator of The Lone Ranger. They sought a new adventure series, one that was grittier, not Western, and with political undertones. The result was The Green Hornet, the title character a distant relative of The Lone Ranger.

Hodge landed the job voicing the protagonist and title character. He served memorably from 1936 to '43 and later dubbed his voice on the movie version, even though another actor played the character.

At the end of the radio show, Hodge went on to television, playing Captain Video on a live DuMont network show.

Hodge brought wonder into the lives of millions of listeners, stirring their imaginations with his portrayals of colorful heroes.
Albert Hodge Captain Video DuMont Network Show Ravenna Ohia voice of The Green Hornet WXYZ's spinoff of the Lone Ranger