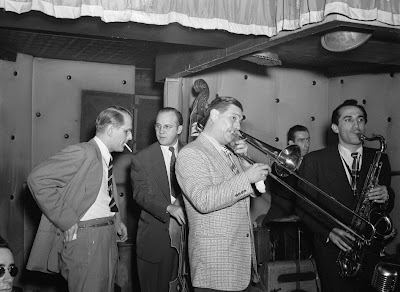 It's our pleasure to wish a happy birthday to trombonist Jack Teagarden. If you're a fan of classics like "Them There Eyes," "Lazy River," and "Jeepers Creepers," you're a fan of Jack Teagarden, who helped bring those tunes to life on the airwaves as a member of the Paul Whiteman Orchestra. The outfit's radio show was called The Old Gold/Paul Whiteman Hour, its rival B.A. Rolfe and his Lucky Strike Orchestra.

The barrel-chested Teagarden is recognized as one of the all-time greats in the world of jazz; he was a great trombonist and also served as a vocalist, with a distinctive style that would grow to be influential.

His playing style was versatile, jazz at its heart but tending toward blues. Some of this may be due to his self-taught nature. Finally, let's not neglect to mention the songs Teagarden penned: "Shake Your Hips," "Swingin' On The Teagarden Gate," and, with Benny Goodman, "Texas Tea Party."
Benny Goodman Jack Teagarden Paul Whiteman