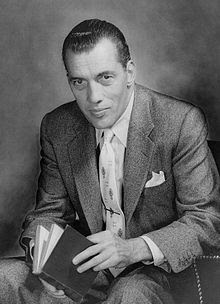 Edward Vincent "Ed" Sullivan (September 28, 1901 – October 13, 1974) was a former boxer  who became an American entertainment writer and television host. He was most popular as the host of The Ed Sullivan Show, which aired  from 1948 to 1971 (a total of 23 years), one of the longest-running variety shows in U.S. broadcast history

Sullivan began his media work as a newspaper sportswriter for The New York Evening Graphic. Later on he replaced Walter Winchell as the theatre columnist. His column was published in The New York Daily News. In 1933, he started his career in film by writing and starring in the film Mr. Broadway. This was a milestone for Sullivan, allowing him to meet entertainers and celebrities. Sullivan soon became one of Winchell's main rivals, setting the El Morocco nightclub in New York as his unofficial headquarters against Winchell's seat of power at the nearby Stork Club. Sullivan continued writing for The News throughout his broadcasting career and his popularity long outlived that of Walter Winchell.
Ed Sullivan's Gossip and Interview Broadcast