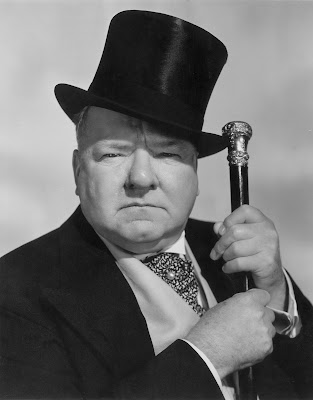 Raise your glass to toast a playboy, a consort of the likes of John Barrymore, Anthony Quinn, Cecil B. DeMille, and a hard drinker, comedy icon W.C. Fields.

Fields is known for his acerbic, biting persona, which includes sexism and a general misanthropy. He was a vaudeville and Broadway one-man act, a silent film star, a talkie star, and a radio star.

In 1937, Fields joined the cast of The Chase and Sanborn Hour, popularly remembered as "The Edgar Bergen and Charlie McCarthy" show. One of Fields' niches was trading insults with the dummy, Charlie. "Is that your nose or are you eating (insert a vegetable here)" was a standard line from Charlie to Fields, whose nose was not small.

A shorter-lived stint for Fields was as emcee of Your Hit Parade, briefly known as Your Hit Parade With W.C. Fields. His particular brand of comedy kept him on the show for just a month.

If you're looking for a quote for the day, try this one from Fields: "I never drink water because of the disgusting things fish do in it."
Anthony Quinn Broadway Cecil B. DeMille Edgar Bergen and Charlie McCarthy John Barrymore The Chase and Sanborn Hour W.C. Fields Your Hit Parade