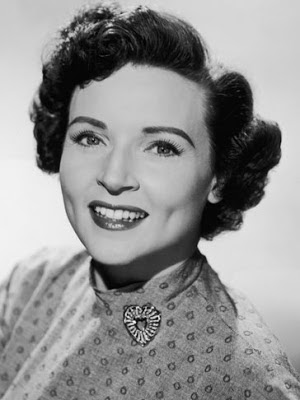 Recently made re-famous by a facebook campaign which 125,000 urged Saturday Night Live to have her as a host, Betty White is now on television ads and a ninety-one-year-old pop culture phenom. Many think of her as Rose Nylund in the popular 1980's television sitcom Golden Girls.

However, this Emmy-winning actress and former model also lent her charm to oldtime radio.
Casual fans may not remember, but Ms. White appeared on two known episodes of This Is Your FBI and three of Empire Builders.

The Empire Builder was a show chronicling adventures on a train by that name that traveled the nation. One of White's appearances was on Dec. 22, 1930, when she played a ten-year-old crippled orphan girl, Ann, who meets a wealthy bachelor.

She appeared on the "Big Buildup" episode of This Is Your FBI on Aug. 15, 1947, and on "Larcenous Bride" on Aug. 12, 1949. One wonders if she herself remembers these long-ago gigs. Let's do our part to keep the memory alive!
Betty White Empire Builders Golden Girls Rose Nylund Saturday Night Live This Is Your FBI