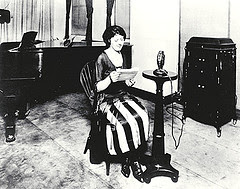 August 16: 1922: WEAF for the first time, use the new studio atop the Western Electric in New Yor City for broadcast its program

WEAF was built by AT&T, a telecomm company that was had a monopoly on the telephone lines. AT&T  wanted to extend the coverage of a station with quality audio.

AT&T merged The conglomerate’s Western Electric division that made radio components with Bell System , AT&T the phone company that developed wired and wireless. WEAF used as a place for experiment.