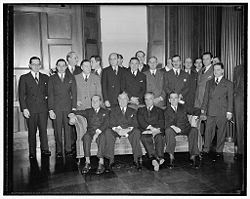 On October 14, 1943: Radio Corporation of America sold NBC Blue network to businessman Edward J. Noble who gave it the new name as ABC. It sold for upwards of eight million dollars.  The company continued to produce quality radio dramas during the golden age of radio.

After purchasing the Blue Network, Noble founded the American Broadcasting Company and he also became the co-founder of the Life Savers Corporation.
NBC Blue is sold to Edward Noble