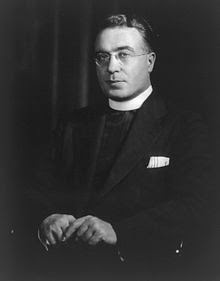 October 5, 1930:  A red letter day for CBS. After the above-mentioned orchestra broadcast, Fighting Priest Father Coughlin gave his first network radio broadcast. His oratory filled the airwaves for more than a decade. His voice first graced the airwaves through WJR Detroit in 1926.

Priest Coughlin was born in Hamilton, Ontario, and was ordained to the priesthood in Toronto in 1916.  He began his radio broadcasts on station WJR in 1926 by giving a weekly hour long radio program in response to cross burnings by the Ku Klux Klan on the grounds of his church.

Father Coughlin mainly covered religious topics in his weekly radio addresses until the beginning of the Depression. His program was in contrast to the political topics which dominated his radio speeches throughout the 1930s. Later he followed the trend topics at that time which is political message. He vocally opposed communism and socialism. Known as an outspoken anti-communist, in July 1930 he received star billing as a witness before the House Committee to Investigate Communist Activities.

In 1931 after Coughlin refused to accept network demands that his scripts be reviewed prior to broadcast, the CBS radio network dropped free sponsorship. He raised money to create his own national network, which soon reached millions of listeners on a 36-station hookup. He strongly endorsed Franklin D. Roosevelt during the 1932 Presidential election.
charles coughlin father coughlin first radio broadcast