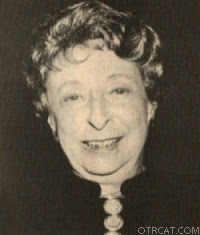 October 16, 1939: The Right to Happiness, a 15 minute drama, turned out to be one of the longest running shows of its kind. It was first welcomed on the Blue Network by radio listeners. "Song of the Soul," the radio show's theme song, seemed to be a cast of thousands. The Right to Happiness moved over to CBS in 1941 before it moved back to NBC in 1942. Fourteen years later, The Right to Happiness returned to CBS, where it stayed until its last days in 1960. Over its 21 year period, it took many different actors to play the various roles.

The story focused on the life of Carolyn Allen, the daughter of a magazine editor, and the mistakes and tragedies that she went through.

For 21-years, Proctor and Gamble remained as the show's main sponsor.
'The Right to Happiness' began on NBC Blue Network