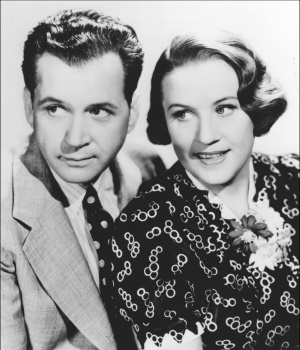 As a title for a program, Smackout has a distinctly current sound. It could be a particularly obnoxious reality show about to premier on MTV. Yet it was an early radio show from 1931 starring Marian and Jim Jordan, who we'd later know as Fibber McGee and Molly. And get this: the title came from a catch phrase "we're smack out of that" used by a character named Uncle Luke at his country store. The show ran four years, first on Chi-town's WMAQ and then on NBC. One fan was Ms. Henrietta Johnson Lewis, which trivia savants might know as a member of the family that owned the Johnson Wax Company, which would go on to sponsor Fibber. ("Look, Molly, there's no dull season for wax polish sales!")

Since we're celebrating the day of Marian's birth:. She was born in Peoria, IL in 1898 and sang in a Catholic choir. Doing so is, of course, a good way to meet men, with one example being Jim Jordan. Legend has it that the cute couple would reach out to grasp each other's hands at the end of broadcasts.
Fibber McGee and Molly Jim Jordan Johnson Wax Company Marian Jordan Ms. Henrietta Johnson Lewis Smackout we're smack out of that