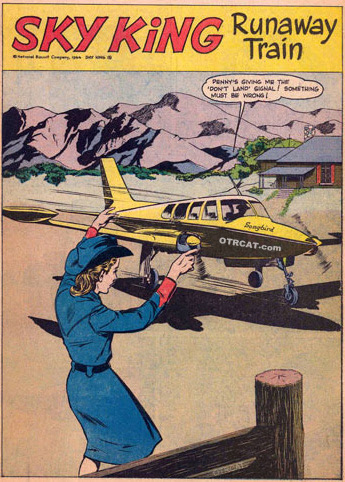 October 28, 1946: The Mars Candy sponsored program Sky King went on the air for the final time on ABC. It originally featured Lester as Sky, followed by Earl Nightingale. and lastly Roy Engel. Beryl Vaughn performed the role of Sky’s niece while Jack Biven performed as Chipper, and Cliff Soubier starred as the ranch foreman.

Sky King was a radio adventure series aired in the 1940's and 50's on radio and TV. The main character, Schuyler "Sky" King, was said to be based on a true-to-life personality named Jack Cones.

King's character was both a rancher and a pilot, and his adventures involved chasing spies and criminals with the help of his plane, Songbird. Although different planes were used during the series' entire run, it was always called by that name.

The actors that portrayed Sky in the radio and TV series included John Reed King, Earl Nightingale, and Kirby Grant.
'Sky King' and his final flight on NBC