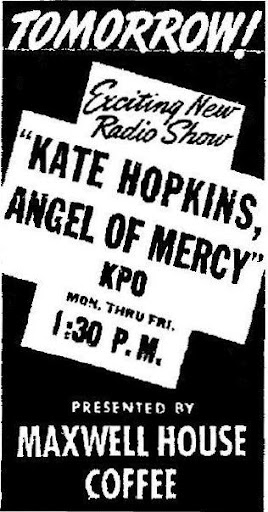 October 7, 1939: The Kate Hopkins 15-minute radio drama Angel of Mercy was heard for the first time on CBS radio. It was written by Chester McCraken and Gertrude Berg (writer and Emmy Award-winning actress of The Goldbergs, a popular radio and TV series in the 1940's & 1950's). Tom Hopkins, Kate's husband, was played by eventual Beat the Clock host Clayton 'Bud' Collyer. Ralph Edwards of future This is Your Life fame was the announcer of the four year run of Angel of Mercy was and the sponsor was Maxwell House coffee.