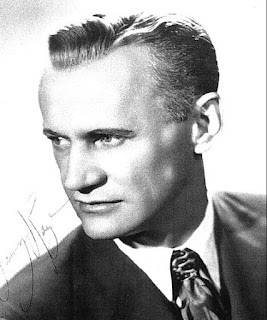 Let's swing and sway with Sammy Kaye. The winsome sax player, clarinetist and bandleader was born on this day, 1910.

Sammy Kaye won over audiences with such feature and "so you want to lead a band," which let audience members hop on stage and do just that. He was one of the most famous bandleaders of the golden era of radio.

Kaye hosted NBC's Sunday Serenade and Sammy Kaye's Chrysler Showroom. The latter was a fifteen-minute program that ran in the latter half of 1949. This show was all about Sammy and the boys playing popular songs of the day, including requests. Examples are "Snuggled On Your Shoulder," "Five Foot Two," "Kiss Me Sweet," and "Candy Kisses."