It isn't easy to write a short entry on Jerry Lewis. Doing so can't capture his kinetic energy, his flowing and sprawling brand of physical humor. Nor is it adequate for discussing all the things he was: director, comedian, radio personality, fund raiser, winner of many prestigious awards. 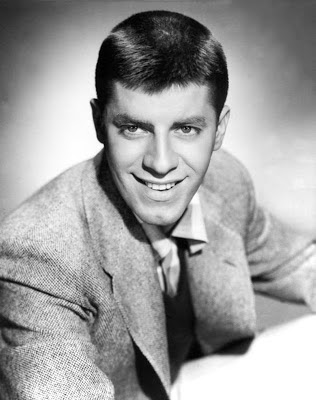 Maybe we should just focus on radio! The Martin and Lewis Show leapt onto the airwaves in 1949, starring Lewis and his partner Dean Martin, a popular nightclub act. With Martin as the butt of Lewis's jokes, the two provided zany and energetic comedy while also hosting guests. The program did not skimp on talent, with guests including Lucille Ball, Peter Lorre, Henry Fonda, John Carradine, Jane Russell, and many others.

On the air or live, the two were the biggest comedy act of the early 1950's. As was the case with many radio stars, their show had more than one incarnation with more than one sponsor. In 1951, they took the airwaves under the name The Dean Martin and Jerry Lewis Show. A comedy song called "A Streetcar Named Max" got guest Dinah Shore laughing in what Variety Magazine would deem "one of the most hilarious thirty minutes in radio."

Lewis would go on to a tremendously successful film career, as an actor, yes, but also as a writer and director. In June of 2012 he was hospitalized after collapsing at a Friars' Club function.
Dinah Shore Henry Fonda Jane Russell Jerry Lewis John Carradine Lucille Ball Martin and Lewis Show one of the most hilarious thirty minutes in radio Peter Lorre