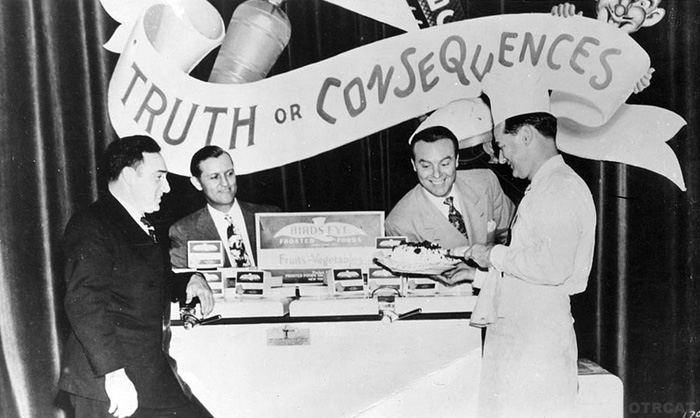 March 6, 1948: Ralph Edwards produced the quiz game show Truth or Consequences. After 10 weeks of speculations by participants of the show, it was finally exposed that The Walking Man was actually Jack Benny.

Truth or Consequences was a quiz show aired on NBC radio and hosted by Ralph Edwards from 1940-1957. The concept of the show was to combine the quiz element of typical game shows with some crazy, silly stunts.

The Truth or Consequences radio program featured contestants that were required to answer trivia questions in two seconds before the buzzer sounded. Usually, the questions were so nonsensical and weird that no one would be able to answer them correctly. In case the contestant was able to give a correct answer, there would be a follow up question, which would cause him to reach the 2-second time limit. Because of that, some chose to intentionally answer the questions incorrectly. No matter what they did, everything would boil down to performing an embarrassing stunt as a consequence.

Edwards got the idea for the show from the parlor game "Forfeits." The show became such a huge hit that it earned itself a TV adaptation from 1950-1988.
but funny Truth or Consequence on NBC The weird