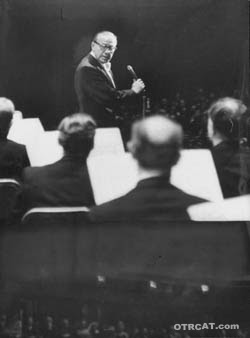 March 22, 1948: The Voice of Firestone became the only commercial radio show of that period to be transmitted mutually on FM and AM radio stations.

The Voice of Firestone, which was originally aired in 1928 under the title The Firestone Hour, was one of the earliest and longest-running music programs on the radio. It was a program that featured classical music from different operas. The list of performers included Nadine Conner, Igor Gorin, Robert Merrill, Eleanor Steber, Rise Stevens, Thomas Thomas, Dorothy Warenskjold, and many others.

The program was also aired on TV in 1949, with its last episode coming in 1963. Firestone Tire Company sponsored the program throughout its entire run.
'The Voice of Firestone' -- radio's pioneer music program