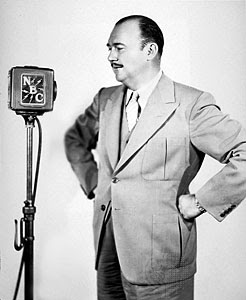 Paul Whiteman was a Jazz bandleader who brought his genre of music to a million or so listeners who may not have otherwise enjoyed it. He was commercially successful and panned by critics, who felt he wasn't playing "real" jazz. To this minor controversy, he added fuel by calling himself "The King of Jazz."

It's worth a mention that his band had room for such great musicians as Red Nichols, Tommy Dorsey, and Eddie Lambert.

A couple of decades into his disputed run as "King of Jazz," Whiteman was tapped to host the radio show Kraft Music Program, which he faithfully did from '33 to '35. He then performed on the Chesterfield Hour and finally Paul Whiteman Presents.