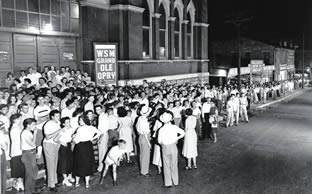 December 10, 1927: (85 years ago today) George Hay introduce the WSM Barn Dance as The Grand Ole Opry for the first time on this day.

The Grand Ole Opry began just five years after commercial radio was born in the United States. In 1925, WSM was  formed. National Life hired  George D. Hay as WSM's first program director. Hay started his career on radio at WLS, Chicago. He created a barn dance show. Hay called himself "The Solemn Old Judge" and launched, along with championship fiddler Uncle Jimmy Thompson, what would become the WSM Barn Dance.

Hay's popular weekly broadcast was renamed the Grand Ole Opry in 1927. When WSM radio increased the power of its transmission to 50,000 watts in 1932, the Opry, which aired every Saturday night, could be heard by most of the United States and parts of Canada.  Additional recordings can be heard from old radio cat.
First WSM Barn Dance Broadcast gran ole opry grand ole opry