December 14, 1953: Peter and the Wolf is narrated on the Bell Telephone Hour 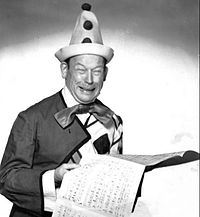 December 14, 1953: Peter and the Wolf is a famous children’s story written by Prokofiev. It was narrated by Fred Allen on the Bell Telephone Hour on NBC.

The original Peter and the Wolf was introduced by Natalya Sats to Prokofiev. The intent was to help children gain a sense of musical taste. The show was not very popular however, but today it is one of the best known stories in the world.
Peter and the Wolf is narrated on the Bell Telephone Hour